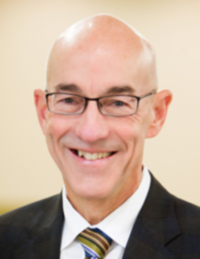 This site was chosen as the best and most politically correct option back in 1992.  At that time, Memorial and Providence owned CWFM as a joint venture.  When it came to finding a location for the clinic and residency, each hospital had favored options….in their respective neighborhoods.  It created an impasse, and we needed to get going so that we’d have a home for the residents when they arrived.  Dr. Nancy Foote, chair of the governing group, conspired to drive toward consensus.  At the next meeting of the governing group, she began by unveiling a map of Yakima and asking “OK….tell us where the DMZ is!”

It worked.  Everybody had a good laugh, and all had to admit that they had been pushing for locations that they knew wouldn’t be acceptable to the other hospital.  That led to the drawing of a corridor along 16th Avenue that was deemed by all to be an acceptable zone for development of the CWFM clinic and residency site.  Two locations were identified.  One was the building that is now Craft Warehouse at 16th Avenue and Nob Hill.  At that time, it was a former Safeway store, sitting vacant.  The other was our current location.

Developing the architectural plan, choosing a contractor, and completing construction all took place on a compressed timeline, which was not easy.  There were lots of compromises and tradeoffs that had to be negotiated to arrive at an affordable solution.  Mother Nature didn’t cooperate either.  That winter, it snowed about three times a week, every week.  It wasn’t a lot of snow, but enough that the workers spent hours many mornings sweeping and shoveling snow.  It was a relief to finally get the roof on and move out of the weather.  It all worked out, and we moved from our temporary location on 40th Avenue to our new building in late May, 1993….just about a month ahead of the arrival of our first 13 residents.

By 1996, we had outgrown our original space and hired consultants to help us create a plan for expansion that would foster excellence in both patient care and resident education. The “Comings and Goings” item in the March 22, 1996 CWFM Employee Newsletter reported…”Those ‘space men’, Dick and Larry, from Medical Design International have been nosing around our space to talk with spaced out employees about the need for space. At this writing, Dick and Larry have put some space between themselves and CWFM to draft a plan to ‘specifically’ meet our needs.” Thus began a nearly two year journey to add 9,000 sq. ft. plus a basement to our original building, separating core clinical and residency functions. Newsletter articles during those two years reported the design and approval process and the progress of Phase One (new construction to the east), Phase Two (new construction and remodeling to the north), and Phases Three and Four (interior remodeling). We exhibited creativity and flexibility as we moved work teams into temporary and new spaces. CWFM long time employees and patients will remember when reception moved temporarily to the south side of the building while construction took place in the front. It was an adventure! Along the way we celebrated the addition of a new and larger classroom that would fit our entire staff, the opening of our Yo Quiero Café, a residency entrance that would offload non-patient care related traffic from the clinic reception desk, more exam rooms and medical records space, larger nursing stations, and an unfinished basement with rows and rows of shelving for files, records, and equipment storage.

CWFM’s transition to CHCW in 2003 necessitated an expansion of patient care services and staff to support existing and new service lines. Once again, we faced a major remodel and addition of space. In 2005 we added exam rooms in the far west hallway – bringing our total to 30, an additional procedure room, a pharmacy, an expanded waiting room, a larger lab, and utility areas. We also created office suites on the lower level for our Medical Records, Billing and Accounting Departments. We worked collaboratively to manage the strain of workflow interruption and again, celebrated the completion of the project as we settled into our new space.

By 2007, CHCW had grown substantially with the addition of Yakima Pediatrics, Naches Medical Clinic, and development of a new clinic in Ellensburg.  All of this required more staff in administration, patient accounts, accounting and payroll, and other departments, and these departments were intermingled with the CWFM clinic and residency.  It was time for dedicated space for the administrative and corporate functions of CHCW.  The current administrative office and Board Room were built to meet the need for more space, and the lower level was remodeled to accommodate the growing accounting and patient accounts departments.  This remodel would be the last addition at the CWFM site.  Rules dictate how many square feet of structure can occupy a lot of a given size, and this pushed us to the maximum.  If more space was needed, we knew that it would have to be somewhere else.

That’s where we are.  More space is needed.  The CWFM-Residency will complete its expansion from 18 residents to 30 residents with the class that will join the program next June.  Enrollment of new patients continues to outstrip capacity, and is expected to accelerate as health care reforms result in more insurance coverage for our patients, old and new.  New models of care delivery also require more space.  New health care workers to provide services such as visits, integrated behavioral health, care coordination and patient education need space, and patient care areas require redesign to accommodate their work.

We have completed the purchase of an administrative building.  Located at 501 South 5th Avenue, the location provides over 11,000 square feet of office and meeting space.  Some modest remodeling of the space will start soon, and we should be moving in by early spring.  The move will include all of the administrative offices and corporate functions, patient accounts, accounting, and IT.  The administrative offices of the Senior & Residential Care program, Senior Smiles, and Care Coordination will also move to this site.

The CWFM clinic and residency space on Lincoln Avenue will get another major remodel.  After the move to the new administration offices, the spaces vacated will be remodeled to meet the expanded need for clinical services and education. CHCW’s space odyssey continues…